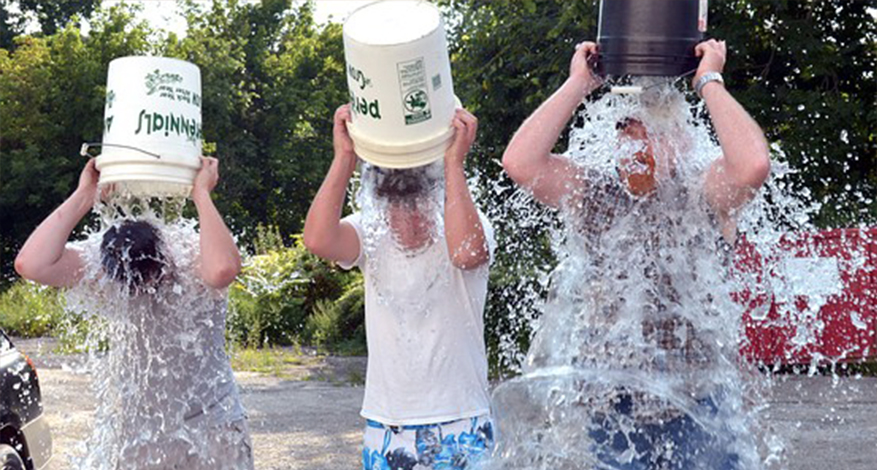 Back in the summer of 2014, the Ice Bucket challenge made waves – and upwards of £7 million for the Association – when it swept around the world. With videos of people taking part in the relay-style viral sensation, it dominated social media for several months.

Four years on, it has undergone something of a revival with the help of another global phenomenon: K-pop.

In June 2018, South Korean rapper, Sean, kickstarted a new challenge in Seoul, posting a video of himself emptying a bucket of freezing water over his head before nominating other Korean celebrities to do the same. The revival is in aid of the Seungil Hope Foundation, with the money raised going towards a fund to build South Korea’s first hospital dedicated to those living with MND.

The charity is named after for-mer basketball coach, Park Seungil, who was diagnosed with MND in 2002, and who was there to witness Sean get-ting doused. The specialist hospital has been a long-standing wish of Seungil’s, and it’s hoped that the donations from the 2018 challenge, as well as resulting media attention, will enable him to see it become a reality.

Such attention is owed largely to the soaring popularity of those who have thrown their support behind the campaign. Girls’ Generation veteran, Sooyoung, was one of the first to take the baton from Sean, and it didn’t take long for other K-pop idols to get involved. Within a few weeks, a whole slew of famous faces had already completed the challenge, including EXO’s Chanyeol, BTOB sing-er and Goblin star, Sungjae, and several members of TWICE, Monsta X and Wanna One, respectively.

K-pop stars are known for inspiring dedicated support around the world, and it is not uncommon for fans to emulate their idols’ charitable examples by undertaking good deeds of their own. But you don’t have to be a fan to be inspired, and there is plenty you can do to help people living with MND closer to home.

What’s in a name?

ALS, or amyotrophic lateral sclerosis, is another name for MND and is used most widely in the US. Amyotrophic comes from the Greek word ‘amyotrophia’, meaning lacking muscle nourishment, while lateral refers to the area of the spinal cord that is affected by the disease. Sclerosis (also from the Greek word, spelt sklēroun) denotes a hardening, which is what happens to muscles when the disease is present. Motor Neurone Disease is the name we use in the UK; it is also used in several other Commonwealth countries.

Many participants of the 2018 South Korean challenge also refer to MND as Lou Gehrig’s disease, an eponymous term originated (and still occasionally used) in North America following the diagnosis of the New York Yankees baseball player Lou Gehrig in 1939.

The ‘challenge’ part of the campaign might be obvious – getting doused with cold water is not the most appealing prospect – but did you know there is a deeper meaning behind it? The numbing effect of the ice that briefly causes the recipient to freeze and tense up is supposed to represent the stiffness and reduced mobility that MND induces. While the challengers experience the sensation momentarily, MND sufferers have no choice but to endure it for the rest of their lives.

Researchers, funded by the money raised globally in 2014, made a significant breakthrough two years later when they discovered a variant of the NEK1 gene, which repairs DNA damage acquired through ageing. The variant struggles to do this, causing damage to build up over time.